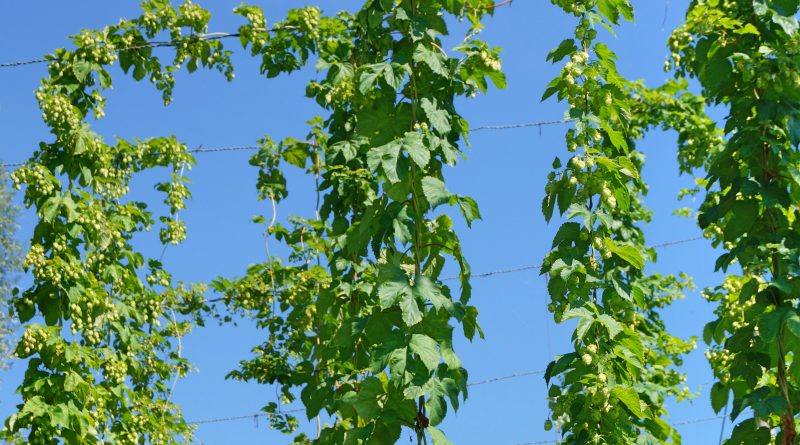 Those who caught CBS Morning News on the second Saturday of November were treated to a more than five-minute feature on the hop harvest that consumes Washington’s Yakima Valley each year.

In the lead in, a voiceover notes that the late-summer harvest attracts representatives from many of the country’s biggest craft beer makers. The brewers spend time with the hop farmers, visit the fields and sniff samples pulled from various lots to learn more about the crop and select which lots they’d like to contract.

At one point, cameras showed a team of scentologists from Sierra Nevada. The group had joined the brewery’s co-founder Ken Grossman for the pilgrimage. Cascade hops, you see, propelled Sierra Nevada and its ubiquitous Pale Ale to its current spot as the third-largest craft brewery in the nation. Gotta make sure the hops are just right to achieve that kind of success.

Founders Brewing’s Adam Schmitt, who manages brewing operations, talked about the need to identify consistent, high-quality hops each year. That’s why he makes the journey to Yakima.

The CBS piece did not feature Andrew Witchey. No surprise there. Witchey, who opened Dancing Gnome Beer outside of Pittsburgh in October 2016, didn’t have time to visit America’s hop capital. Likely won’t next year, either.

Does that put him at a disadvantage when sourcing ingredients for the hop-forward ales that have quickly gained Dancing Gnome a large following? Not at all.

Witchey said obtaining high-quality hop varietals is rarely an issue. “It’s never about getting a bad product if you’re on top of it.”

Higher-quality hops across the board

Swersey said two key factors have led to the noticeable improvement. First, brewers are now much better at being able to articulate what they want. Second, Growers have dramatically added kilning capacity.

Kilns are used to dry and preserve hops immediately after the flowers are harvested. With more kilning capacity, growers can run the kilns at lower temperatures, which helps to preserve more of the aromas and flavors brewers look to impart in wildly popular India Pale Ales and other beer styles.

“The predominant guiding light there is that the overall crop is superior to what it was even just a few short years ago,” said Swersey. “That has meant that everybody – whether they have the resources to go to selection or not – really has benefited. The rising tide is lifting all boats.”

Why, then, do many larger breweries find it important to visit the Yakima Valley hop farms each harvest season to personally select certain lots? In a word: consistency.

“Some breweries contract tens of thousands of pounds and have a dedicated team that goes there for a whole week and inspects every crop,” explained Witchey, who also serves as Dancing Gnome’s head brewer. “The benefit of that is consistency. You have acres upon acres of the same hop, but every acre may be different. They’re able to find acres that are most similar and then figure out, ‘we want to blend half of this acre and half of this acre.’”

For example, some acres of Mosaic hops may have a more pronounced dankness. Others may be more dark-berry forward and slightly dank. “You’re going to have brewers that have a preference on one side or the other. It’s still Mosaic,” said Witchey.

“Consistency and quality is important across the board – but theirs is so important because [their product] may sit on the shelf for months,” added Witchey. “If you’re going to get a Stone IPA in Pennsylvania you expect it to taste the same as it does in California.”

“Beauty is in the eye of the beholder”

Swersey emphasized that when a larger brewery passes on a particular acre or variety of hop during selection it’s rarely due to quality.

“One guy might turn up his nose at a particular lot. That doesn’t mean it’s a bad lot; it just means it doesn’t suit his beers,” he said, adding: “Beauty is in the eye of the beholder.”

YCH HOPS, a grower-owned supplier of hops to the craft beer world has an intensive process to make sure brewers consistently receive high-quality hops, whether they visit Yakima Valley for the harvest or not.

“For customers who are unable to attend hop selection, we carefully make specific pellet blends of lots that have passed the initial quality inspection so that the end result is a pellet lot that is a true representative of the variety, is high quality and meets all of our standards,” wrote Cait Schut of YCH in and email. “By doing this we ensure that regardless if you come to select or not, you will always be receiving very high-quality product that is true to the variety.”

The Yakima Valley produces 40 percent of the hops purchased by U.S. craft breweries, but that doesn’t mean the flowers – which are only used as an ingredient in beer – are endless.

“Every craft brewer, large and small, seems to periodically bump up against a varietal shortage here and there. So the market’s not perfect,” said Swersey.

Witchey said many local breweries stay in touch regularly and help each other out when shortages arise. “I build relationships with brewers around here. I know some that have an overage of some variety or another and I go to them.”

The number of U.S. breweries has more than doubled in the past five years, and the Yakima Valley hop farms have grown to keep up with demand.

Growers have developed new varietals, such as Cashmere, in response to brewers’ requests for bold flavor profiles. Lupulin powder, a recent invention that condenses the hops’ important alpha acids into a more efficient powder format, has become more popular.

Witchey has three beers in his rotation that feature lupulin powder, and Swersey is confident innovation will continue.

“Ten years ago craft brewers thought differently about hops than they do now. And I think the craft industry really looked differently than it does now. And we’ve all grown and have really learned how to communicate our needs with each other and do some very different things,” he said.