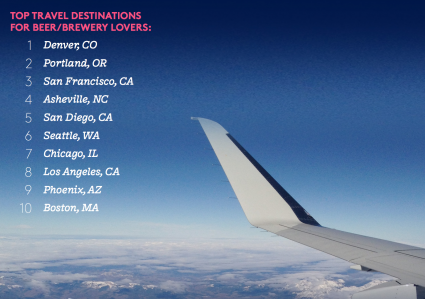 The “search-and-discovery” (look up, check in, rate or review, repeat) app, Foursquare recently released a report focusing on the growing craft beer trends across the U.S. Titled How You Brewin’?: 2017 Location-based Craft Beer Insights, the report delivered insights about the foot traffic patterns and taste preferences among Foursquare City Guide and Foursquare Swarm app users who visited craft beer businesses over the course of the year.

A major part of the report honed in on where beer tourists traveled in 2017, taking into account or “flagging” those who traveled more than 150 miles from home to visit a brewery. With that information, Fourquare was able to generate a list with the top destinations for beer travel in 2017.

These Are the Most Popular Cities for Beer Travelers in 2017:

Not surprisingly, the list topped off with Denver, a long-time beer capital of the U.S. Its home of Colorado has 334 craft breweries to date, and nearly half of them are right here in the Mile High City. This includes established brewers such as Great Divide, Avery and Breckenridge (not to mention Molson Coors and its beloved Blue Moon), along with relative newcomers like Epic, Ratio Beerworks and Crooked Stave. Denver is also the home of the annual Great American Beer Festival, one of the biggest beer festivals and award shows in the country, organized by the Brewers Association.

Another no-brainer when it comes to popular destinations for beer lovers is Portland. The city has the Pacific Northwest advantage of access to the best ingredients (all of them—water, hops, malt and yeast), and boasts close to 60 breweries. Popular spots include Hopworks Urban Brewery, Gigantic Brewing and Cascade Brewing.

San Francisco is one of the top beer cities that’s often overshadowed by its West Coast neighbors. With big names like 21st Amendment, Almanac Beer Co. and Speakeasy Ales and Lagers (which has officially reopened), it’s no wonder San Fran has a place on the best beer cities list at number three.

In the past few years, Asheville, North Carolina has become a must for craft beer lovers. It’s appealing for many reasons, like its urban landscape juxtaposition with a staggering natural one, but for beer nerds it’s all about the breweries. Asheville stands out for its high concentration of sought-after niche brewers like Burial and Wicked Weed (the latter controversially sold to AB InBev last year), along with the East Coast offshoots of big West Coast brands like Sierra Nevada, New Belgium and Stone.

The beer and beach lover’s paradise, San Diego is loaded with small brewers, each helping to define its respective neighborhood. Hot craft brewers here include Stone Brewing Co., Ballast Point and Modern Times, but there are lots of other local breweries worth a visit. Find recommendations for small breweries in San Diego here.

First it was grunge, then it was coffee. Now, Seattle is a namesake city for craft beer, too. Surprisingly, Seattle holds the most breweries per capita in the country. Beer tourists here might check out Pike Brewing Co., Cloudburst Brewing Co. or Reuben’s Brews.

With Milwaukee to the North and Grand Rapids to the East, it’s easy to forget that Chicago is a craft beer destination in its own rite. A solid city for any beer lover’s bucket list, Chicago attracts beer travelers with local brewers like Half Acre, Pipeworks and Local Option, plus Three Floyds just over the border in Gary, Indiana.

A few years ago, Los Angeles probably wouldn’t have popped up on this list. But in 2017, we had Golden Road rapidly expanding (thanks to its sale several years ago to AB InBev), the contrary independent Three Weavers changing the game from the ground up in Inglewood, and the cultish Monkish bringing visitors in with hazy IPAs and barrel aged sours, it’s no wonder travelers added brewery visits to their LA itineraries in 2017.

Although this one is somewhat surprising, to Arizona’s credit, the state has 86 craft breweries, ranking 18th in the nation. In Phoenix, brewers like Helton, Helio Basin and Mother Bunch Brewing joining OGs like Sonoran Brewing.

It wouldn’t be an American beer list without Boston, home of the eponymous Boston Beer Company, maker of Samuel Adams. Samuel Adams recently became the official beer sponsor of the Red Sox (replacing Budweiser), so now would be a great time to visit and try their new ballpark-inspired brew, Sam ’76.