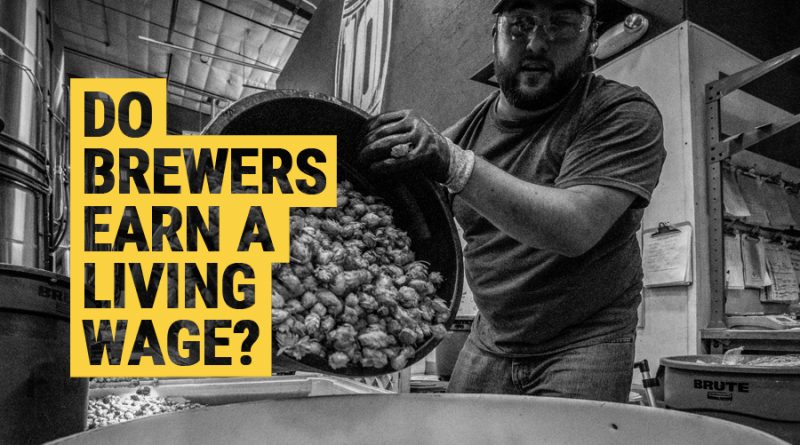 Statistics can tell us a lot about where the craft brewing industry is, and where it needs to go. That’s why we were so excited when Jeff Alworth compiled and published a brewery employee compensation survey. The full review is an essential read and covers everything from benefits to the impact of experience on wages.

As a craft beer job board, we see job openings and job seekers from across America. That’s why we decided to take a closer look at some of the regional variations in the survey. From there we looked into what those variations mean, and how they contribute to where people want to work.

The survey numbers are fascinating, but we were curious about how they compared to some other statistics.

Do Brewers Make A Living Wage?

We know the importance of a living wage. Formulated by MIT, the “living wage” is a metric which calculates the cost of living comfortably (but not excessively) in a given area.

Calculating the 2018 living wage for the survey’s regions gave us a better understanding of how well-paid brewers are in those areas. This isn’t a perfect comparison since numbers can vary widely even within a state. However, it provides a useful starting point.

Note: In averaging the living wage, we used the commonly-accepted metric of a two adult, one child family.

The most obvious finding is that the average brewer does not make a living wage in any region. For single people or families with more than one income, this is not always a problem.

What is more interesting is the impact of regional costs on the value of a wage. Brewers in the North East, for example, have the second-highest average income. However, they are in last place for salary vs. living wage, earning only 74% of a living wage for the region.

Adding the context of living wage to the survey numbers shows that the discrepancy of salaries persists, though in different ways.

When actual income is combined with this ranking, the West Coast emerges as the winner.

The Impact of Brewery Job Numbers

We were curious about how this played out on our job boards. Would the West Coast be a winner there too?

As it happens, the West Coast did win this round as well. After that, the comparison falls apart. While there may be a connection between wages and brewery job vacancies (or breweries per capita in the region), it is less obvious and buried deeper in the numbers.

Clearly, there are other factors driving people to work in regions where the average income doesn’t keep up with the living wage.

What Else Makes a Job Attractive?

There’s no question that wages are important. Most job hunters will pass over even a dream job if it doesn’t pay them enough to survive.

On the other hand, job-seekers can be attracted by more than a higher wage. Given that only 19% of people say that they’re looking for a new job in order to earn more, this might go a long way to explaining our data.

The survey places a lot of emphasis on benefits. There’s a good reason for that: they matter to employees. One study found 48% of job seekers list good benefits as a critical factor in which jobs they apply for, compared to the 46% who list a high salary.

When one out of five brewery workers receives no paid time off, and only 29% of respondents say they have a good healthcare plan (according to the survey), benefits become even more important.

On the upside, the survey did find that less than half of brewery workers had no healthcare plan, and most people with paid time off had 1-2 weeks to use. While these numbers are still behind the national average, it does show that breweries are beginning to offer more benefits than they did previously.

Science and the arts are both careers based on passion. The brewing industry is based on both, so it’s no surprise that brewery employees are in search of meaningful work. Talk to anyone about why they wanted to work in brewing, and you’ll hear stories about enthusiasm, satisfaction, and meaning.

They’re not alone. A survey of 2700 American workers found that nearly a third (32%) remained at their job because they found their work personally meaningful.

Though the work itself factors into this, company culture also plays a part. Among workers who had been recognized by higher-ups within the past six months, 92% felt as though their work was meaningful. For unrecognized workers, that number fell to 72%.

Recognition doesn’t just play into the search for passion and meaning. A brewery which recognizes the contributions of its employees is likely to have a positive community and strong leadership. Both of these things are key to making your brewery an attractive place to work.

In fact, most people rank the community of their workplace as even more significant than its cause, and just behind the importance of their own career.

Everything ties together. After all, strong leaders also do their best to pay employees a fair wage for the region, offer the best benefits they can, and know the importance of passion in the brewing industry. They provide room to grow and support their employees.

It’s important to keep an eye on the big picture, but at the end of the day, the biggest impact we make is at home. By fulfilling the needs – financial and otherwise – of employees, a brewery makes a name for itself as somewhere people want to work.

And by the time the next survey rolls around, the numbers might be even better.