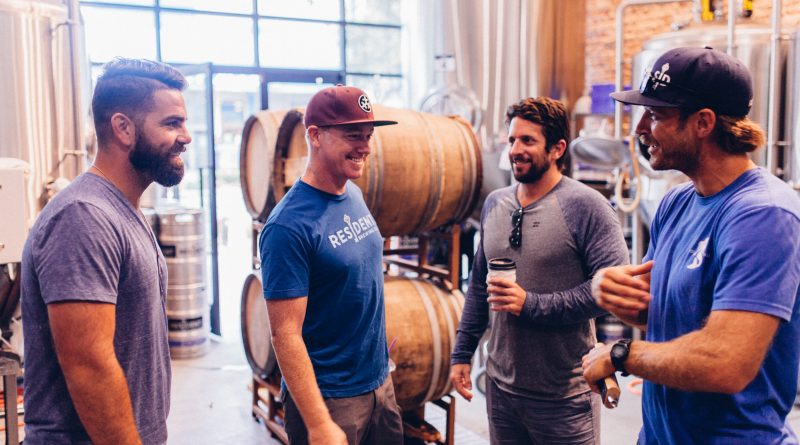 San Diego’s beer scene is no secret to the seasoned connoisseur. With close to 150 breweries, it boasts major brands like Stone Brewing Co. and Ballast Point, along with trendy beer trader favorites like Modern Times. The city even has its own beer, 72 and Hoppy, created in partnership between the San Diego Tourism Authority and Bay City Brewing Co.

But those who are new to the scene might miss much of the beer culture San Diego has to offer. Enter Ben Daly, who might have the best job at Kimpton Hotel Palomar San Diego: beer concierge. As a hotel concierge and full-time beer nerd, Daly is on hand to help Hotel Palomar guests find their way to San Diego’s best beers, starting in the nearby Gaslamp District.

Some breweries Daly recommends for Downtown visitors are Resident Brewing, Half Door Brewing, Societe Brewing, Mission Brewery, and Karl Strauss. A bit further north up the coast are Belching Beaver, an “up-and-coming” brewery with locations in San Diego’s North Park and Ocean Beach (along with locations in Vista and Oceanside, California), and Modern Times, a favorite among beer nerds.

“For me, [being a beer concierge] is basically helping out local guests discover what’s going on in San Diego, and what’s going on with beer. There are at least six places downtown that are walkable or a quick Uber or Taxi away,” Daly said. “A lot of people just want to go to Stone or Ballast Point, and don’t know about the small breweries around the corner.”

One of those small breweries around the corner is Resident Brewing, a brand new brewery two blocks away which is the result of the renovation and new ownership of a neighborhood bar and restaurant, the Local. Resident Brewing has partnered with Hotel Palomar for the hotel’s “Drink Like a Resident” package, offering guests 20 percent off their room rate, a free beer flight at Resident, and face-to-face access to beer concierge, Daly’s arsenal of local beer knowledge.

“I’m a big fan of Resident,” Daly said. “Their Gaslamp Porter one of my favorites.” (The name refers to San Diego’s Gaslamp District, which has emerged as a popular dining and drinking area.) “It’s closeby and somewhere I like to go to grab a beer after work.”

The package introduces hotel guests to Resident Brewing, where they can enjoy a selection of house-made beers along with a plethora of revamped food and drink options.

“Everything is evolved…the employees, the menus, the space. It’s changed dramatically,” said Resident Brewing co-owner, Jimmy Langley, who added that the total buildout of the brewery and bar/restaurant cost about $2.8 million. “The Local was known before as a really good local dive bar, with really good food and a great craft beer selection.” Now, he said, “not only does it offer Resident [beer], there are 50 selections of beer [with a majority from other breweries].”

The Drink Like a Resident package hints at a larger opportunity for brewers to gain more exposure to beer tourists, as well as visitors who are vaguely interested in beer.

“It’s important for us to connect with good hotels that are getting word out about the San Diego craft scene,” said Langley. “The San Diego craft beer scene is really spread out. So spread out, you can go into each of these communities [such as the Gaslamp District and Downtown San Diego] and they each have their own scene. Us being Downtown and Hotel Palomar being really cool makes it a pretty cool partnership, because it gets people into the tasting room.”

And, Langley said, the hotel partnership brings in beer drinkers “across the board.”

“You’ll get the craft beer nerd excited to talk about hops, yeast and the brewing process, you’ll get someone who doesn’t even [follow] craft beer but says, ‘it seemed like I should check it out.’  That’s the spectrum, really. We love people who don’t normally drink craft beer—they’re [some] of our favorites.”

And it doesn’t stop there: Resident Brewing also recently partnered with Everyday California, an adventure tour and apparel company based in La Jolla, California to create a limited release Everyday California IPA available at Resident and select Social Syndicate restaurants throughout San Diego. The brewery is also planning beer dinners at local restaurants, such as Wonderland Ocean Pub.

It’s all part of a larger goal to revitalize and elevate the Downtown San Diego community, Langley said. “My dream is to change the PBID [Downtown Property Business Improvement District] name to the Craft Quarter.”